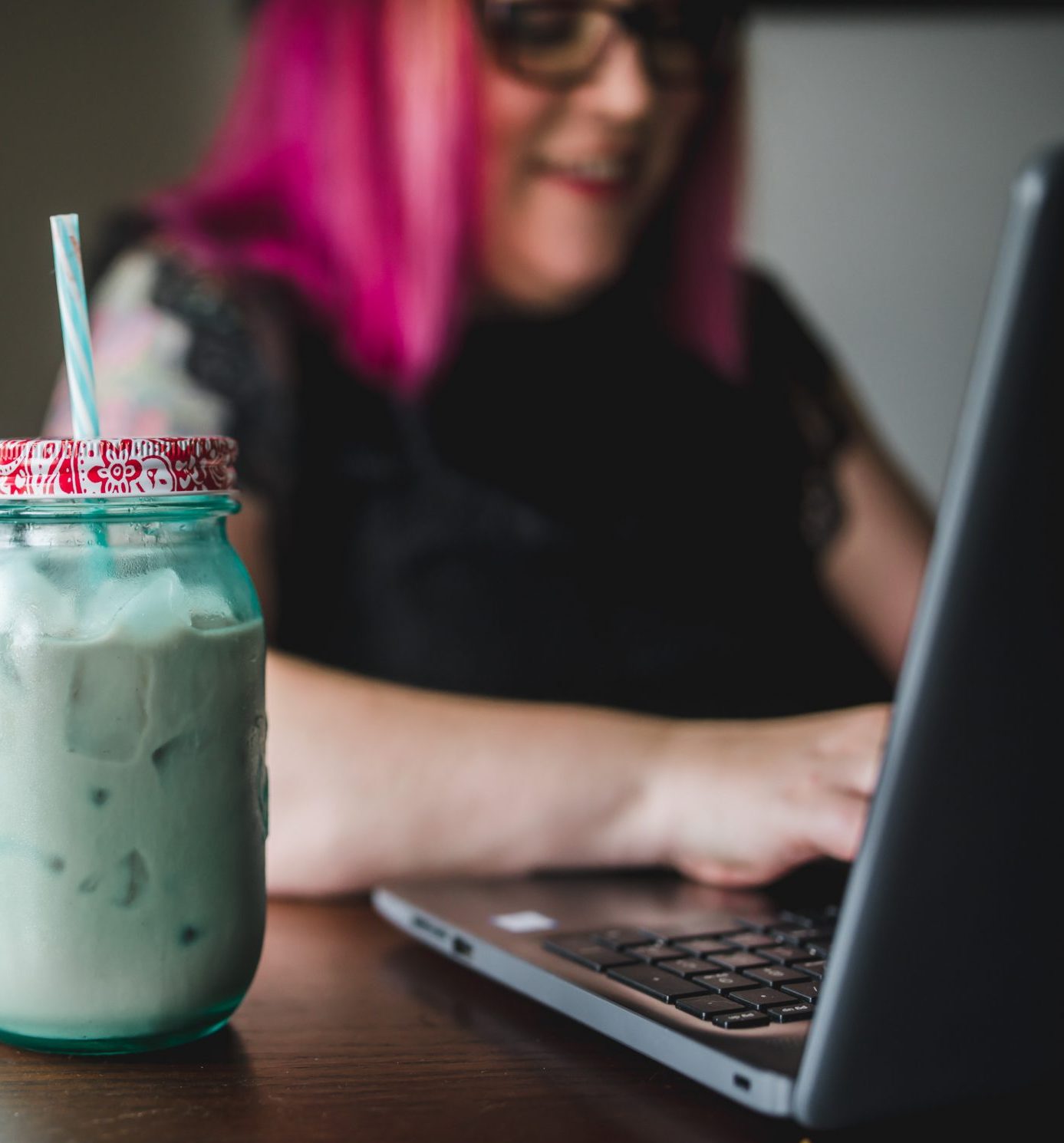 The Marketing Junkie: a role model for young entrepreneurs

As published by the Van Wert Times Bulletin

ROCKFORD, and Van Wert, Ohio — Marie Miller, “The Marketing Junkie”, always knew she wanted to work in marketing, even in high school she knew that is what she wanted to do. She jumped in feet first and hasn’t looked back. Just three years ago, she started her own business with the support of her husband, friends, and mentors, and now she is leveling up in the business world. Her story is one for young women (and men) to take notice of and use as a guide to their forming their own career-building opportunities.

When asked how Miller became interested in graphic arts and marketing, she recalled, “I hated math in high school. As a junior in high school, I didn’t want to take really hard math classes. I wanted to be creative and different.” Miller explained further, “math wasn’t my strong suit.

I was more focused on developing my character through creative outlets like fine arts.

“I actually had an art teacher say ‘You’ve got some real talent. Why don’t you look at this local marketing firm (in Fort Wayne)? They’re looking for interns. Like any teenager, I [said to myself] ‘I want to make money and this internship is free.’ I went to the interview for the internship and I asked for what other opportunities there were beyond just graphic design. I was really interested in something that would give me more hours and pay me.

“They must have seen something in me and they created an administrative assistant role. I worked part-time for $8 an hour answering phones at a 60+ marketing firm. I knew I  just wanted to be around it. I wanted to understand it. And the owner of this firm was so about customer service.”

When Miller graduated from high school, the firm hired her as a full-time administrative assistant while she went to college full-time for graphic design at Purdue-Ft. Wayne. After her first year of college, Miller moved into the art department at the firm where she started applying her graphic design knowledge, creating a career.

Miller said, “I actually learned so much on the job that I was able to navigate through some of my computer classes and help my fellow students. It was really interesting the amount of in-the-moment career experience that I got. From there (I wondered) ‘some of these graphic designers are better than me.

What else in the marketing industry interests me?’”

The Ft. Wayne marketing firm actually kept Miller on their staff for six and a half years, so she was able to travel around within the company and find things that worked for her interests and abilities. She reminisced, “I knew I loved talking. I was voted most talkative in my senior class. I love talking, I love communicating, I love connecting, I love problem-solving. So then I got into coordinating printing. This agency was pretty large so we had somebody specifically just talking to print vendors. And … budgeting…numbers…already, despite hating math, I’m already using it.”

Miller had started her career basically at age 17 and by her early 20s, she had learned a lot about graphic design and marketing. She was shaping her perceptions of customer service and marketing in general. Then she met her current husband in 2007 and moved to Ohio where she worked at a local newspaper (Wapakoneta and St. Marys) in ad sales. She shifted to an agency that focused specifically on advertising. “I was coordinating media buys and wearing multiple hats,” she recalled.

Miller had a huge territory, and she felt that the internet was becoming a threat to printed material in general. Thinking about her future career, she contemplated her hazy future at a job that she wasn’t really loving, mainly because the hours were long and she had to travel several miles each day from start to finish.

She really missed the creative world of the agency and, having been in the area for a while, she knew who the ad companies were. She began working for a website development firm in Lima in the billing department (remember she hated math). “I ended up doing job flow, production, job trafficking, managing the staff schedules, and time accounting. It was left brain stuff, but I was back in the creative world with “my people”, recalled Miller. “It taught me strong leadership skills and showed me an insight to running a business. I never had to do billing before, but here I was seeing how time equals money and how it equals an estimate and how it equals job satisfaction. I’m seeing these pieces coming together.

“Every job that I’ve had has given me something that is used to this day. I made the path myself. I didn’t realize what was happening until a few years later. Because with every job you love or hate something. You love this part but you don’t love that part.”

Several years had passed at the Lima job and, as for most people, life happened. Marie asked the Lima company if she could shift departments and work in graphic design but they refused that request. They wanted her to stay in her existing role. So, Marie thought

“You know what, I don’t have to do this. I have lost my sense of self. I’m going to go do something that allows me to be creative.”

Unfortunately, Miller had a one-year non-compete contract at the firm, meaning that she could not move on to another area advertising firm without penalty. So she took a cell phone retail sales job as a strategy to figure out where she could go after the non-compete period had passed. Retail sales allowed her to renew her loving spirit of connecting with people.

As one of the oldest people at the store (she was closing in on 30), she felt she either had to step into leadership or go nowhere. Miller related, “It was probably the most fun job that I had ever had (up to that point).” Miller was already a doer and a go-getter. Building relationships was not a big deal for her. Selling cell phones allowed her to become ‘techie’ while she learned how to deescalate conflict.

No matter what job she was working at, she took the job by “the horns” and learned as much as she could, not knowing that she would run her own firm one day. With every position she took, she was accumulating knowledge and experience that would one day help her launch her own marketing firm.

Finally, the year of selling cell phones was over. Miller and her husband looked over family finances and decided to start working freelance for marketing firms rather than look for a job directly under an employer. As a freelancer, she had “so much fun developing marketing pieces for businesses.” Being so close to home and working in her community, she got more involved with the community and local businesses. She became president of the (Rockford) Chamber of Commerce, saying

“I started learning what it takes to own a business and supporting our area business community.”

After eight years of freelancing, Miller was challenged by a friend to do more with her experience and talents. She talked to friends, lawyers, accountants, and other business owners to find out the implications of owning and running a business and how to launch a new business. Together with her husband, Miller decided to take the plunge and launch her own business to take her career a step further, and to take responsibility for the work she was doing  and the income she was bringing in. She and her husband named the business “The Marketing Junkie” because her maiden name is Junk and she had been in the marketing business for over half her life.

Miller had learned just about everything up to this point that she needed for running a business: sales, customer service, billing, creativity, project management, job trafficking, and managing people. She felt that she must go in the direction of running her own business, otherwise, all of that experience could go to waste.

A year later, Miller realized that she didn’t have to just provide graphic design services or just social media services.

Miller took advantage of her people-loving spirit. She is an Optimist member, on the United Way board, a campaign chair for the incoming United Way campaign, and has been the Rockford Chamber of Commerce president. She is also involved in a lot of community development, including the Entrepreneurship Fair.

Miller operates out of her home in Rockford, and frequently can be found doing her work at Brewed Expressions and the United Way office. For her, it always comes back to “How can I help a business strengthen and build relationships with their customers to become as successful as possible.”

When asked what the key to her success was, she said,

“Being self-aware of skills and passions, and not being afraid to try something and fail. I had the opportunity to experience several different positions inside of the marketing industry. You need to be vulnerable, not fear failure, be willing to be judged and still pursue your dreams. You need to be able to look ugly and make a lot of mistakes. That’s life, that’s everything.”

Marie Millerhttps://www.themarketingjunkie.com
Marie is a creative ad agency seasoned professional that helps businesses leverage traditional/digital materials to best enhance their customers’ experience. She’s a marketing junkie – THE Marketing Junkie, actually. In her “spare time” you’ll find her working remotely at the front table at Brewed Expressions (seriously, we dare you to find her there. When you do, snap a selfie.) leading the Rockford Ohio Chamber of Commerce, volunteering with the Optimist Club of Van Wert, hosting workshops for area businesses, listening to podcasts, and attending leadership conferences. Problem solver. Ever-learner. Creative thinker. Work-in-progress. Nerd.
Previous Post
What did you learn from the Facebook outage?
Next Post
Marie Miller named 2022-2023 United Way Campaign Chair